Let’s Talk About the Bling! 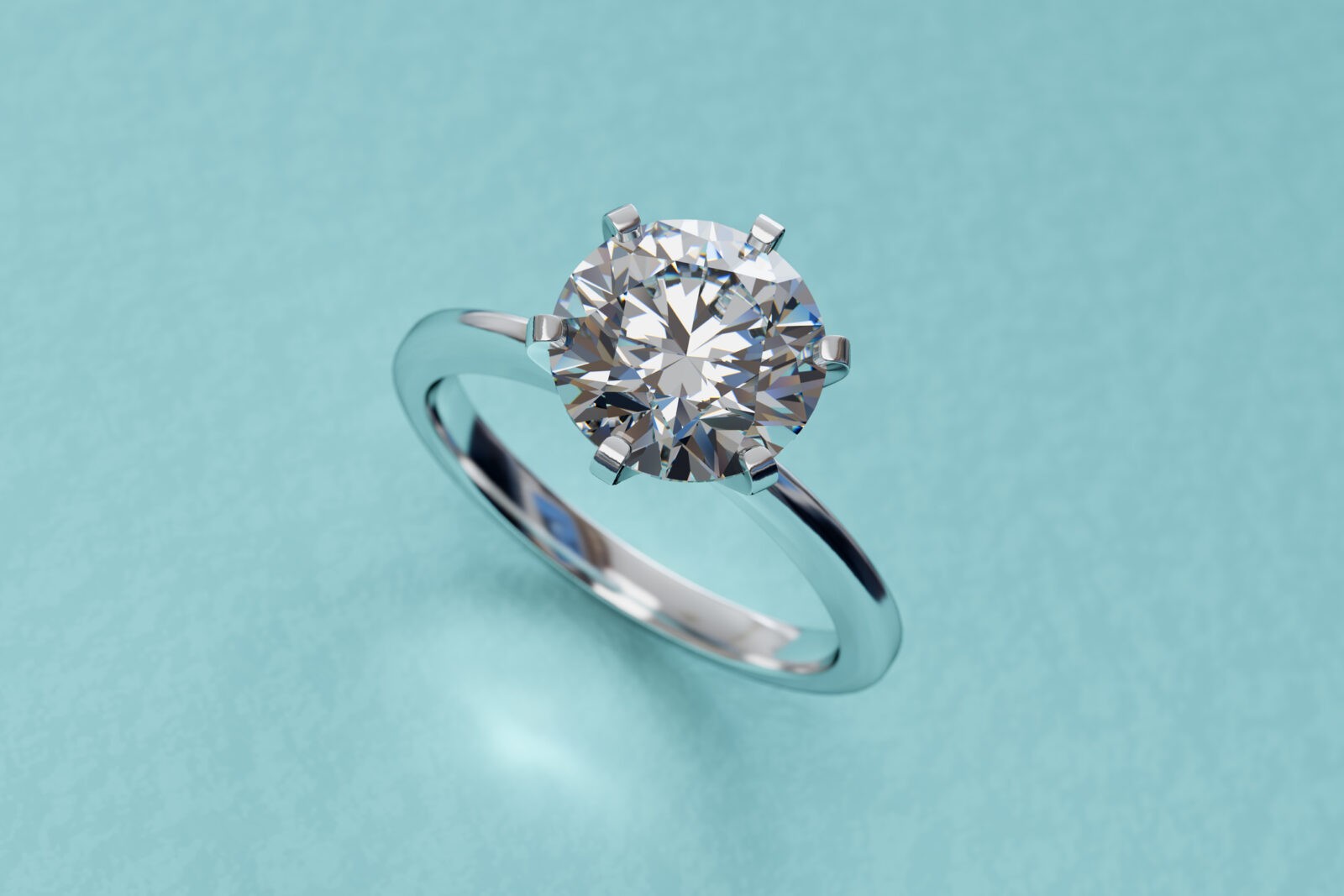 December! For many, it’s arguably the best month of the winter season. Whether you prefer snuggling up on the couch watching Christmas movies or participating in the ugly sweater bar crawl, this time of year is undoubtedly the season of joy, and of reminding others how important they are to you. Between the magic of the holidays and the celebrations they bring, it’s no wonder that, as according to Statista, December is the most popular month of the year to pop the question. So popular in fact, that it has come to be known to the wedding industry as “engagement season.” So, if you’re looking to pop the question during this holiday season, or maybe trying to nudge your partner to do so, we’ve compiled some information about perhaps the most sparkly and exciting part of the engagement process – the ring! 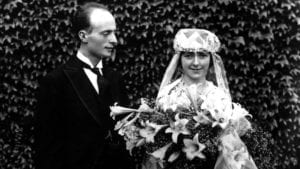 According to the American Gem Society, the concept of engagement rings is believed to have originated from a rather patriarchal ancient Roman tradition in which wives wore rings with tiny keys as a symbol of being owned by their husbands. Obviously, like the rings themselves, this meaning has evolved over the years. While the popularity of diamond rings as we know them was kicked off by the DeBeers “A Diamond is Forever” advertisements of the 20th century, the diamond tradition likely has its roots in with Archduke Maximillian of Austria in the 15th century, who commissioned the first diamond engagement ring we have on record for Mary of Burgundy. This diamond ring sparked a trend for the rich, famous and noble of Europe.

During the Victorian era, ornate engagement rings became increasingly popular. These rings were usually created in the shape of flowers out of diamonds, various gemstones, metals and enamel, giving them the extremely fitting name, “posey rings.” This style of ring continued into the mid-20th century until DeBeers, in 1947, launched its “A Diamond is Forever” campaign, popularizing the idea that like marriage a diamond lasts forever. The diamonds in engagement rings became synonymous with marriage, and a commitment to purity and of course…everlasting love.

When it comes to engagement ring costs, the traditional golden rule that you’ve probably heard before is to spend the equivalent of 3 months’ salary. Obviously, depending on your profession, that number is going to be different for everyone. So, instead it might be more helpful to take a look at what the average person is spending on an engagement ring. According to Statista, the average cost of an engagement ring in 2019 is around $5,900. However, this number does vary by region. In the Mid-Atlantic area, for example, couples spent $7,500 on average for a ring in 2019. Like everything else about your relationship, the ring you get engaged with, from its appearance to its price tag, should be what’s right for you.

Shying Away From Diamonds

The most obvious factor that will affect the price of the ring is the sort of stone it features. While diamonds, as we spoke to earlier, are historically the most popular stone in engagement rings, other stones are quickly rising in popularity. As divorce rates in the United States rest around 41%, there is generally less confidence in the traditional idea of marriage, and many young couples are choosing to view marriage in a more modern way- as a true, equal partnership – making the symbolism of the diamond less relevant.

In addition, many couples are concerned with the sustainability of diamonds. There are many issues within the diamond industry that raise an ethical dilemma, and cannot be overlooked. Diamonds that are sold illegally to support wars and terrorism have come to be known as “blood diamonds.” Meanwhile, there is significant concern regarding the exploitation of workers who mine diamonds in developing countries, as well as the impact that diamond mining has on the environment. With conscious consumerism on the rise, more people are making an effort to ensure that diamonds they purchase are “conflict-free” or “ethically-sourced.” A survey done by Core Communications reported that 87% of American consumers are more likely to purchase a product because the company advocated for an issue they care about. The survey also revealed that millennials are more likely than other generational groups to research the issues a company supports, and the extent to which the company exhibits corporate social responsibility. Online retainers catering to the conflict-free conscious, like Brilliant Earth, Rare Carat, and Blue Nile (to name only a few!) have been more popular with the newly engaged not only for their fair prices, but also their social responsibility.

On an economical note, it’s no secret that increasing student loan debt is weighing on young Americans, from their ability to purchase homes to their desire to get married. As NPR reports, homeownership rates for Americans aged 24 – 32 dropped 9% between 2005 and 2014. As this younger generation of Americans struggles to scrape together enough money to put a down payment on a mortgage, it’s no wonder that more millennials are delaying the expensive and grandiose affair of a wedding, as well. As of 2017, the average person had $37,172 in student loan debt as reported by debt.org. As a result, many millennials who do decide to get married are looking to cut corners financially, and may not prioritize putting a quarter of their annual salary towards a diamond engagement ring.

As a result of these changing consumer trends and financial circumstances, people getting engaged, and millennials in general, are looking towards other stones to outfit their engagement rings with. While some stones, like opal, are simply too soft to hold up to everyday wear the way that a diamond can, there are a variety of harder stones that are becoming increasingly popular in engagement rings. 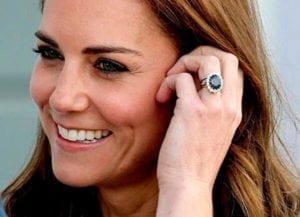 While diamonds rank a solid 10 on the Moh’s scale of hardness, Sapphires come in at a Moh’s scale rating of 9, making them extremely durable, and one of the best diamond alternatives to outfit an engagement ring with. While most people likely picture a dazzling blue stone when they think of a Sapphire, the stones actually come in orange, green, purple –  nearly every color besides red. Present in many of the 140 crown jewels, the Sapphire has long held a symbol of regality. Perhaps the most renowned Sapphire engagement ring was that of Princess Diana’s, given to her in 1981, and now sported by Kate Middleton, the Duchess of Cambridge. Sapphires are thought to represent loyalty, faithfulness and trust, and also hold a special symbolism as they play into the “something blue” tradition for a bride to carry at her wedding. 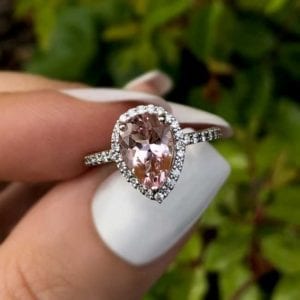 It’s the light pink beryl that’s gaining in popularity. Morganite as we know it today was only discovered just over a century ago in 1910 by George F. Kunz  in Madagascar. Kunz, the chief gemologist at Tiffany & Co., doubled as the personal gemologist of J.P. Morgan, and actually named the pink stone after the banker.

According to a 2017 survey by The Knot, Morganite is the second most popular non-diamond stone after Sapphire. As Vox reports, while the stone is less expensive on a per-carat basis than a diamond ($300 per carat vs. $2,000 per carat), it is actually more rare geologically speaking, and fits the continuous “millennial pink” trend that originated in 2017. Because of this lower price-per-carat, larger stones are available at a price much more affordable than diamonds. Many Morganite engagement rings are set in a complimentary rose gold band. 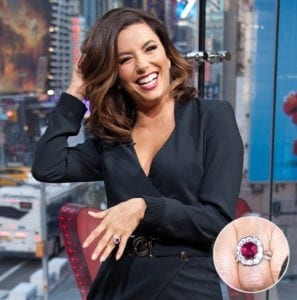 Like Sapphires, Rubies are also in the Corrodum family, and hold a rating of 9 on Moh’s scale, making them ideal for jewelry that endures everyday use, like engagement rings. The bright crimson color of a Ruby is heavily associated with romanticism and passion, making the stone especially suitable for engagement rings. While always a shade of red, Rubies are bright but sometimes dyed to enhance color. These enhancements can have an effect on the durability of the stone, so dyed stones should be avoided. On Valentine’s Day of 2019, film star Orlando Bloom proposed to his girlfriend, singer Katy Perry, with a floral-shaped Ruby ring. Eva Longoria is another star with a ruby engagement ring!

Acording to America’s #1 retail jewelry brand, Gabriel & Co, halo-style engagement rings take the cake as the most popular engagement ring style of 2019. These rings feature one larger stone, typically propped up by prongs, surrounded by a “halo” of smaller stones. The rings have a vintage looks that still manages to appear trendy and modern.

With one centered diamond usually still serving as the focal point of the ring, multi-stone engagement rings are ideal for the person who just can’t have enough bling! Multi-stone rings most often seem to feature 3 stones, representing the past, present and future of a relationship.

Thought to have been killed off after the1990s, it appears that yellow gold engagement rings are making a strong comeback as we enter the next decade. We may have Megan Markle, the newly appointed Duchess of Sussex, to thank for that. Having been spotted time after time sporting gold accessories, Markle’s husband Prince Harry explained the choice, stating, “The ring is obviously yellow gold because that’s [Meghan’s] favorite…” As we see other trends from the 1990s like scrunchies and chunky sneakers resurface, perhaps it’s no surprise that yellow gold is coming back, as well.

All trends aside, it’s most important to choose the engagement ring that you’ll value for years to come, and that is as unique and special as your relationship.

Interested in learning more about a prenuptial agreement? Read our FAQ section here, and watch our informational videos here.